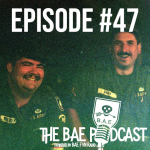 Four, yes four big guys on this episode. No more Liam doing is solo. We review the BAEmaniac’s Choice Awards. Find out who we think was snubbed. Operation Junction City: The Movie is discussed in depth. We talked about Dragon’s Back: An Khe Pass tickets going live. And Operation Klondike get’s a little preview since it’s coming soon.

Links to things we talked about:
Dragon’s Back: An Khe Pass
The 2022 BAEmaniac’s Choice Awards
Operation Junction City: The Movie

Have a question for us to discuss the next episode? Ask it here!

Did you know you could listen to this and the other episodes on Spotify?